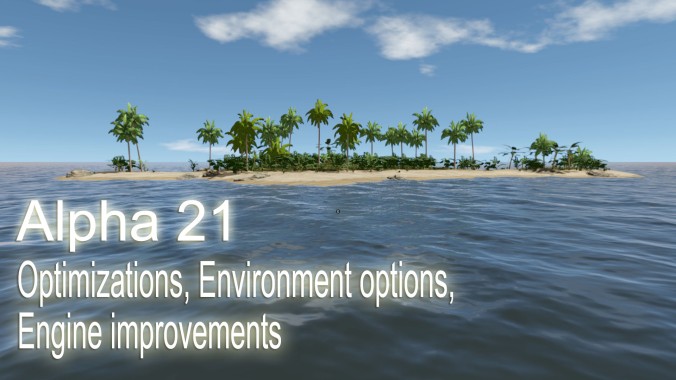 the new Escape the Pacific version ‘Alpha 21’ is now available.

For this ‘Summer Schedule’ update we were mainly focusing on optimizing the internal game engine, preparing the environment and the island generator for a deeper ocean and bigger islands and we have also added some Environment customization options.

One of the most computing heavy feature that was optimized was the dynamic wetness of all of the “wetable” objects. Buoyancy of floatable objects was also causing extra CPU load so it was the next thing on our list we optimized.

Palm Trees have gotten their optimization pass as well – when not necessary they are using less colliders. Levels of detail for vegetation plants was optimized to cause less load when displaying them on distanced islands. All of those above engine and item optimizations provide up to ~30-40% FPS improvement in some situations.

Other internal engine modifications that were needed to prepare the system for long awaited topology features: Deeper ocean, Bigger islands and more island biome types. Please note: Newly generated worlds with the same Seed number may be slightly different than they were with the older engine versions. Saved games are not affected in any way!

These engine modifications provide the possibility to alter some of the environment parameters directly on gamer end. Newly added Environment Options are described as follows:

Grass Density – The grass density option influences the density of the generated grass. It is needed to load a game or to start a new one to see the desired effect.

Vegetation Density – The vegetation density option influences the density of the generated vegetation – plants, ferns and so on. It is working only with newly generated and/or saved games. It has no effect on existing savegames.

Coral Density – The coral density option influences the density of the generated corals and sea weed. It is needed to load a game or to start a new one to get the desired effect.

Coral Fish Density – The coral fish density option influences the density and the size of the generated corals fish schools. It is needed to load a game or to start a new one to see the desired effect.

Fish Flock Density – The fish flock density option influences the density and the size of the generated fish flocks – for now only salmons. It is required to load a game or to start a new one to get the desired effect.

That is all what we planned to release in this summer update. We plan to continue to work on the internal engine and on preparing the system for the future topology feature updates. We plan to work also on the issues which will be fixed in order based on community requests and on their severity.