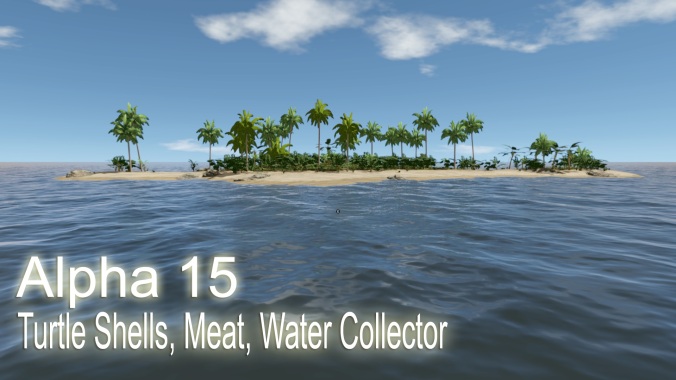 the new Escape the Pacific version ‘Alpha 15′ is now available.

With this update we are beginning to add some new content to make the game more enjoyable. There is a new Water Collector and dead turtles give Turtle Shells and Meat. The turtles’ AI has also been upgraded a little. Some issues were also fixed and a couple of functionalities were improved.

The first object of the many which will be added continually is the Water Collector. Next to Coconut Pots it cab be used to catch rain water. It is possible to drink directly from it or to fill empty Coconut Pots. The Water Collector handles the same Wet functionality as other ‘wetable’ objects – it can dry up on direct Sun on hot days. To be able to collect the rain it must be ensured that it is not built under some roofs or palms fronds.

Turtles found their first real usage: They are providing the needed Turtle Shell for the Water Collector and they are also providing some Meat to allow the players to diversify his eating habit. The turtles are now hiding in their shells when the player hits them.

The usage of campfire is much easier now. We have optimized some functionality and some colliders to ensure the player gets focus on those parts of the Campfire while aiming at it. We have also fixed some Campfire issues to make it more reliable.

01. Added: Aiming at all Cookable objects in CookPlaces displays correct cooking state
02. Added: Aiming with rock, stick, kindling and fire saw maps to CampFire in case of a CookPlace (easier aiming at campfire)
03. Fixed: All CampFire colliders are mapped to the CampFire itself (easier aiming at campfire)
04. Fixed: ActionBar shows “Put” shortcut for Stick Small in case of CampFire in focus
05. Fixed: Cooked meal is correctly displayed in CookPlaces after save/load
06. Fixed: Edible objects have their Hunger status dislayed in Inventory after switching selection from a non-tool/-drinkable object
07. Fixed: Sea_Shell_1 (“Scallop shell”) isn’t mapped to fake oyster after save/load
08. Added: The duration of the ‘White Screen’ at game startup was lowered and thanks to that the Alpha Screen is shown earlier
09. Fixed: Floor collider adjusted to not prevent player getting over the last step on the ramp to the upper floor
10. Changed: The new cooktimes (ingame minutes): Oyster 10, Crab 20, Meat 30
11. Changed: Cookplace position (in CampFire) updated to prevent Oysters from clipping into the rocks

We will continue with general rechecking of all of the game features and will fix issues as they appear. The sailing system will also need some tweaking and tuning. We plan to add another possible processing of meat and also a new animal feature. We plan to work on further improving the Crabs AI and make the Turtles AI capable to swim as well as fixing the remaining issues will allow us which will be fixed based on their severity.