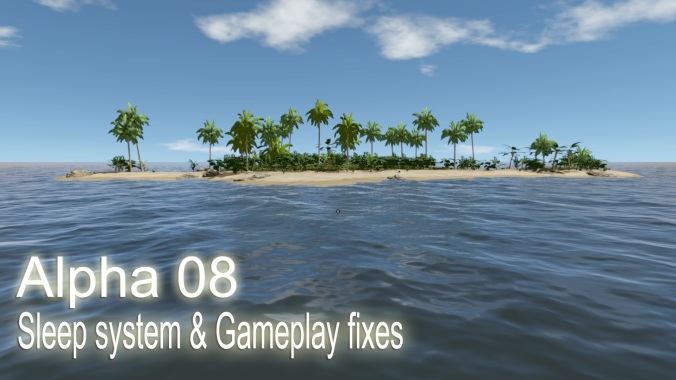 the new Escape the Pacific version ‘Alpha 08’ is now available.

For this update we were mainly focusing on the new Sleep system. The ‘disappearing brown coconut’ and a couple of save/load issues were also solved. Some UI improvements were done too.

The issues with not displaying built structures on other islands (except the starting island) along with the Ramp not attaching to the Raft are now finally fixed.

The “Tiredness increase speed” is set to even lower values when running, fast swimming and fast paddling to avoid getting annoyed by the new basic Sleep system. For this the Sleep screen has got some new interactive controls and added a Hint screen for explanation purposes: When tiredness exceeds some high value, player character begins to yawn and blink with increasing probability. Your player character could even fall asleep for a few ingame minutes (some seconds in real time). Yawning, blinking and Microsleeping probability is higher at night than during the day. In the future the time needed to fully recover by sleeping will depend on bed quality.

01. Added: New interactive Sleep screen
02. Added: Hint Screen for Tiredness
03. Added: Bed can be used with items equipped in hands
04. Added: Sleeping with an Axe in hands possible
05. Added: Sleep Screen can be closed with Escape key
06. Tweak: Tiredness increase value is even slower when running/swimming/paddling

As the Raft system still has some major issues we will continue with extensive testing and we will try to fix as many of those issues as possible. Besides the raft system fixes we will finalize the Sleep screen and implement the functionality for ‘Sleep till SunSet’ and ‘Sleep till SunRise’ buttons.

There will also be new gameplay elements, models and functionality as far as fixing the remaining Save system/Raft issues allows us which we’ll take care of based on their severity.